Andrea Nones-Kobiakov was about to board a plane from Mexico City to Curitiba, Brazil, when she received the message that her work-stay with Manu Buffara, her mentor in the category Cooking for Change, couldn’t take place as planned. What would have been their first physical encounter since the beginning of the fifth edition of Forecast had been ultimately called off. Instead, the two decided to hold a series of digital cooking sessions, open to anyone interested in experimenting with recipes.

New restrictions imposed due to rising infection rates in Brazil meant the two could not work together in Manu’s restaurant or visit the urban garden project where most of the ingredient served at the chef’s Curitiba eatery are grown. Thinking on their feet, they decided, with support from Goethe–Institut Sao Paulo, to transform their work-stay into a participatory digital experience designed to convey the ideas at the core of Andrea’s Forecast project, titled Whatever That Ground May Be.

The events, co-hosted by Forecast and Goethe–Institut São Paulo, were moderated by Ingrid Cuentas, a Colombian artist based in São Paulo. Here, journalist Fernanda Danelon, who participated in the sessions on March 24, 26, and 27, shares her impressions of the online cooking experience.

Venezuelan artist Andrea Nones-Kobiakov and Brazilian chef Manu Buffara invited participants in the three digital sessions to rethink the kitchen as a meeting place, while highlighting the cultural, political, and caring aspects inherent to the act of cooking. Andrea, who is currently living and working in Mexico while completing a Ph.D. in Arts, sees the kitchen as a place of artistic expression; a sensorial as well as aesthetic experience. As her work at Forecast deals with memories linked to flavors, she brought different traditional and family recipes to each session, meticulously sharing each component so that her cooking partner Manu and the audience could join her in creating and recreating new culinary experiences. While preparing the dishes, the chef and the artist discussed the “comeback” home cooking is making these days (even before the pandemic, albeit accelerated by it), and dug deeper into how the ways we feed ourselves can change the world.

Cooking as an act of love

On the first day, Andrea baked bell peppers, reinterpreting an old family recipe that was meaningful for her mother and herself. While preparing the dish, the artist recalled heartfelt memories from her childhood, such as coming home after school and finding her mom making her favorite dish. “These memories bring an intuitive knowledge,” Andrea says. “When you cook a family recipe, to get to the true flavor of your memory, you use that intuition.”

The emotional memories brought about by food are also extremely present in the work of the award-winning chef Manu Buffara, whose restaurant Manu follows a dedicated farm-to-table approach and works closely with local producers. “We all have some kind of affective memory with food that can make anyone feel comforted and welcome,” says Buffara, who enjoys using cuisine as an instrument to connect with others. 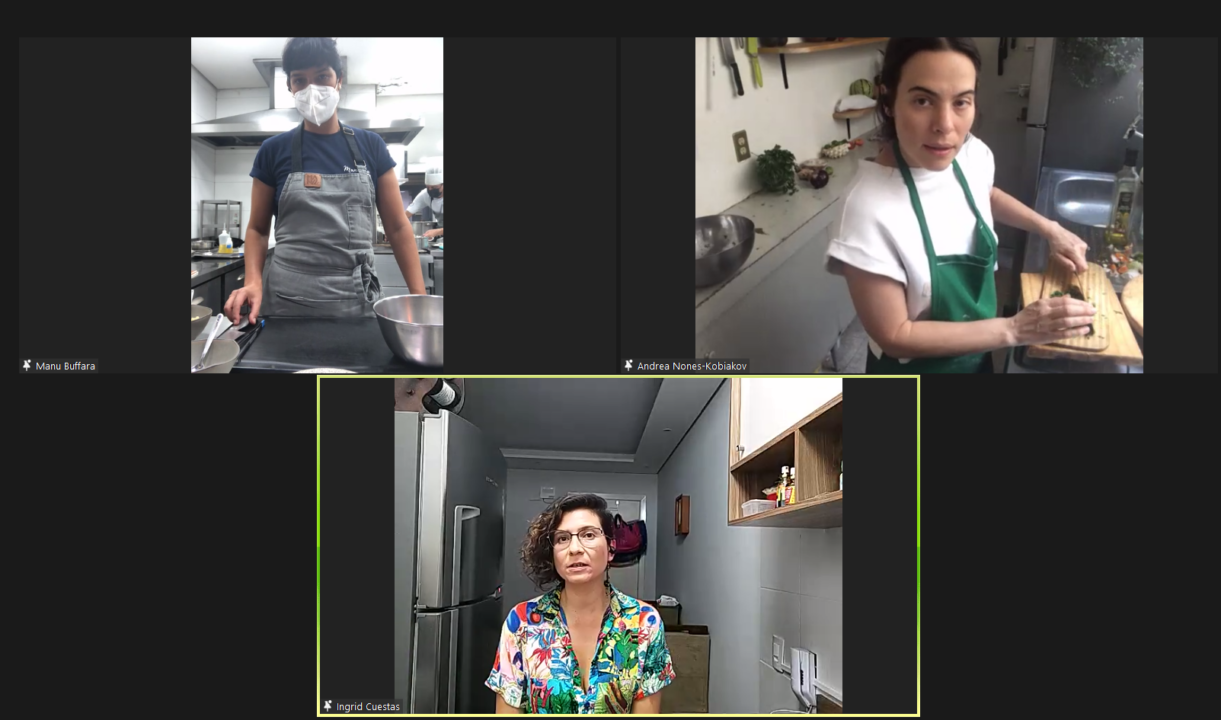 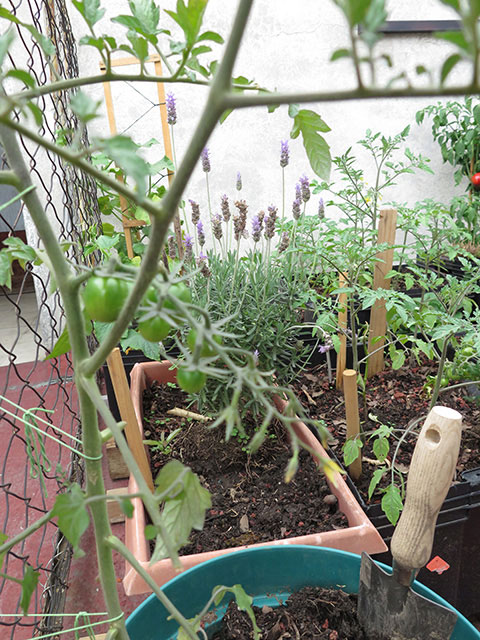 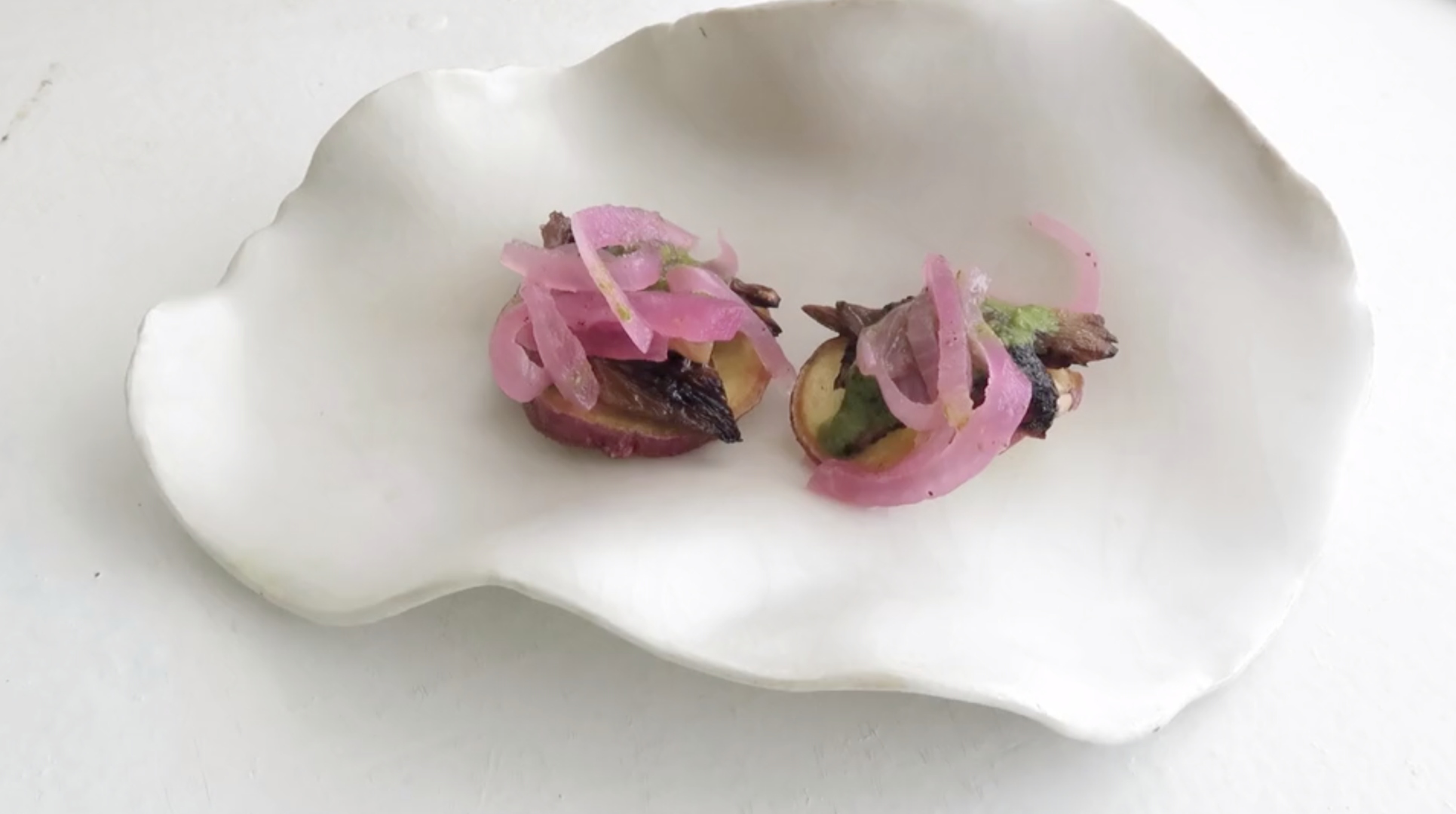 Cooking as a political act

“What’s the story behind a potato?” Manu asked at the second session, encouraging everyone to reflect on where the food on our plates comes from. Not taking things for granted, one should hopefully begin to value the food in natura a lot more, where it is grown organically and sustainably. As an environmental activist, Manu has also founded the Urban Farms project to bring people closer to their food in its most natural form, advocating for environmental education and food security in all parts of Brazilian society. While preparing a salted spinach and baked potato gazpacho, Manu shared her thoughts on how the pandemic reconnected people with the act of cooking as they were isolated in their homes. Many households started cooking with more care and intention for the first time, preparing comforting meals and consequently paying more attention to the ingredients they use. This inspired new reflections on the food they consume.

Andrea shared how, during quarantine in Mexico City, she insisted on cultivating a rooftop garden in her building, growing broccoli, tomatoes, beans, herbs, and spices. For her, planting vegetables is a political act. “I look for ways to insert concepts of permaculture in the urban day to day,” she says while savoring a spinach broth in a ceramic bowl she’d made herself.

The kitchen as a meeting place

The senses awaken when Andrea shows the audience her mushroom ceviche, served with pickled Mexican red onions in a curved plate whose organic shape seems to be formed to nestle perfectly in the palm of her hand. In the third and last session, the Venezuelan artist presents the kitchen area as a place of gathering, where she would cook with her family and discover an entirely new universe of possibilities. Today, Andrea’s work focuses on the culinary ritual itself as balm for the soul and nourishment for all the senses.

Andrea’s work can be seen as a reflection of Manu’s cooking, for whom dealing with ingredients is to have access to knowledge about different cultures and extraordinary people. For Manu, “tradition is essential. Before cooking something more modern you must be proud of your origins; of the knowledge that was passed from generation to generation,” she says, holding a raspberry vinegar bottle, a recipe inherited from her great-grandfather. For Manu, cooking is equated with feelings, cooking is emotional. Cooking feeds the soul.

Fernanda Danelon is a journalist and sustainable-lifestyle writer based in São Paulo.