Jaime Patarroyo’s Forecast proposal explores the idea of empathetic space: a living environment capable of exhibiting human reactions to the people occupy-ing it. Using advanced materials, the designer will develop a reactive fabric based on materials that respond to human touch—questioning the relationship between human behavior and digital technologies.

“I would like to explore the idea of an environment that is capable of feeling and reacting to the people occu-pying it. A space that imitates a simple human re-action, to see if empathy can be developed by the user of the space. Spaces are shaped by their context. I would like to examine the repercussions of a living environment shaped by the actions of its user or inhabitant.” 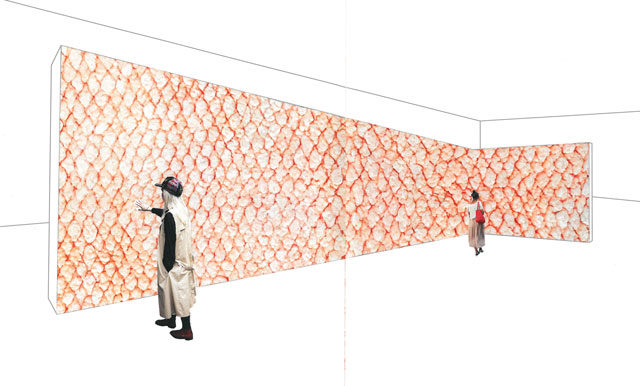 Patarroyo hopes to work with two materials to create a physical response within the fabric:  conductive threads that detect human touch, and shape memory alloys that interact with electricity by either expanding or contracting. By combining these properties, Patarroyo’s project envisions adaptive fibers that simulate elements of human body language.

The designer’s Forecast proposal expands on his Metus project (2011), which pro-duced interactive toys capable of imitating emotions such as fear or loneliness. Patarroyo’s innovative designs make it easy to identify with his pieces, which range from Frago, a timid toy with a fear of loud noises, to Solo, a four-legged wooden creature with separation anxiety. In his Extensions project (2015), he applied the idea of identification to an architectural context. In it, an apartment building’s lights pulsed in tandem with the inhabitants’ heartbeats.

Jaime Patarroyo is a Colombian interaction designer and artist who has studied in Russia, Colombia, and Canada. Find out more about his work at jaimepatarroyo.com.