In mid-July, Canadian-born designer Jon Stam, who is one half of the Amsterdam-based practice Commonplace Studio, traveled to the Kunstgewerbemuseum (Museum of Applied Arts) in Dresden to work with his mentor Tulga Beyerle, the museum’s director, on ways in which design can invade the collection.

Gaining access to the museum’s storage rooms, Stam was able to understand first-hand some of the challenges institutions face regarding items in their collections that aren’t currently on display, and the difficulties in conveying the amount of research dedicated to each artifact. Jon Stam describes the visit in his own words:

“Tulga, my mentor, is not only taking me to places that I normally wouldn’t be able to access, she’s also introducing me to the people working directly with the objects, so throughout this process I had experts to contact, and the privilege to listen to what they’re fascinated by and why they think [the museum] is so valuable. 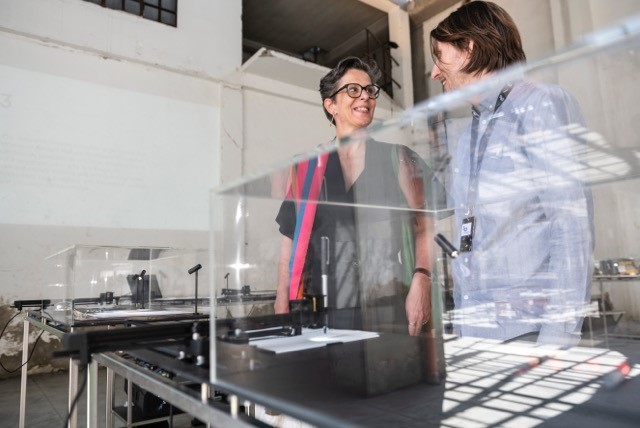 In preparation of coming to Dresden I sent a list of questions: I wanted to know which objects had the most documentation, which had the least, which objects were controversial, and which were collected for the purpose of study. I was taken to the original Kunstgewerbe Museum in the city, which is now primarily used as storage, not only for this institute but for other museums as well. It’s such a surreal place—you come into a room filled with plaster casts, or a fake chapel that was built just to show medieval objects.

This building is far too small to be a museum now; it’s where some of the research is done. Tulga introduced me to the head of restoration, who opened these rooms and removed the covers from some famous cabinets and clocks. She showed me hidden signatures and details in these objects, some of which have only recently been found. What’s remarkable about this experience is that you really feel the passion of the people working at the institute, and that’s an entirely different way of looking at the object.”

Following two intensive days exploring the museum, Commonplace Studio has decided to build a series of tools that would address specific limitations and shortcomings of traditional museum display. Tulga Beyerle and Jon Stam describe how the time spent working together in the museum led to new prototypes that will be on view at the Forecast Festival in October:

Tulga Beyerle: After the Forecast Forum, when I chose to mentor Commonplace Studio, I was interested in the way they combine digital and analog. Now, having the two days here gave me a better idea of how careful Jon is in respecting the objects. The objects speak to us. To me that’s the important thing, but how do we make them speak? I hope that Commonplace Studio invades the museum in a way that gives voices to different objects, or allows us as a museum to add layers that we normally can’t add.

Jon Stam: I have some ideas about technology that can be built in order to give information in a more tactile, less screen-dependent, digital way. One is the drawing machines that read digital files and give information, but what you take at the end is truly analog; it’s ink on paper.

TB: That’s exactly what intrigues me about the work. How he deals with the material is very subtle.

JS: My rule is to explore possibilities and build prototypes using the inspiration from here and seeing how these can be brought further. I see this experimentation as the first concrete action that we’d present at the festival.

TB: I truly believe that these prototypes can become possible devices to enhance the museum experience without distracting audiences from the object itself.

JS: I’m actually taking a very critical stance on when technology is brought into cultural institutions and trying to use that as my starting point. How could this experience be different, tailored to this space, and more respectful to the objects? I’ll be building prototypes that are tools. They can be used when necessary or put away when it is not deemed valuable. There’s potential but the drive and thinking process is coming from this place, the issues the museum has, spaces, and constraints. It becomes part of the design process and the criteria I have to deal with.

TB: The mentoring part, and offering these possibilities of entering inaccessible rooms of the museum, is the best inspirational quality I can offer to someone who wants to work on these kinds of questions. This investigation is here, for this museum, but could be used in other museums as the issues are quite similar. It’s a very good way of starting to develop something.