“The objects are organized in such a way that paths are offered through the garden, paths of pitch. The participants thread their way through this garden according to rules that allow them to find different paths by making pitch connections between the items. Since these items—cups/plates/forks/spoons/car parts/grills/lamp posts/light bulbs/etc.—tend to produce ‘inharmonic spectra’ that may be several different pitches at once, like bells, they reward close listening, and open new paths.” 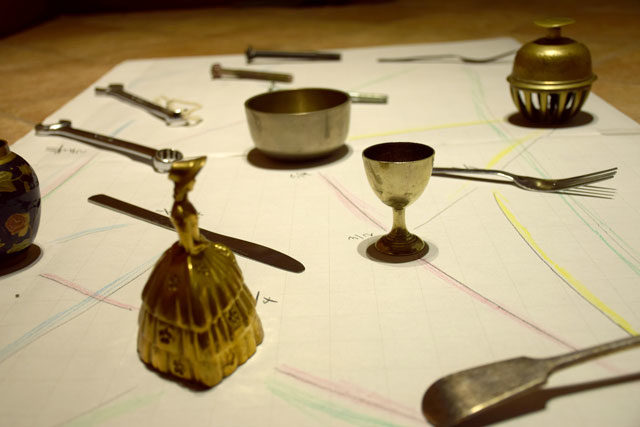 Resonant Paths brings to life Mc Laughlin’s personal obsession with the pitched sound of everyday objects and his love of labyrinths. The composer’s work has focused on similar aspects of resonance. His 2015 composition Reciprocal Structures combined improvisation and a glass light installation for a perfor-mance in London.

Mc Laughlin’s research interests include the materiality of sound, (improvised) music as community, and music as social “play,” especially at the intersection of experimental and community music. For the Forecast Forum, he brings his previous work’s inherent theatricality and narrative aspects to the fore. He thus retains the focus on his chosen objects’ agency, while making his work more social and public.

Scott Mc Laughlin is a composer and university lecturer in composition and music technology at the University of Leeds. Learn more about his work at lutins.co.uk.